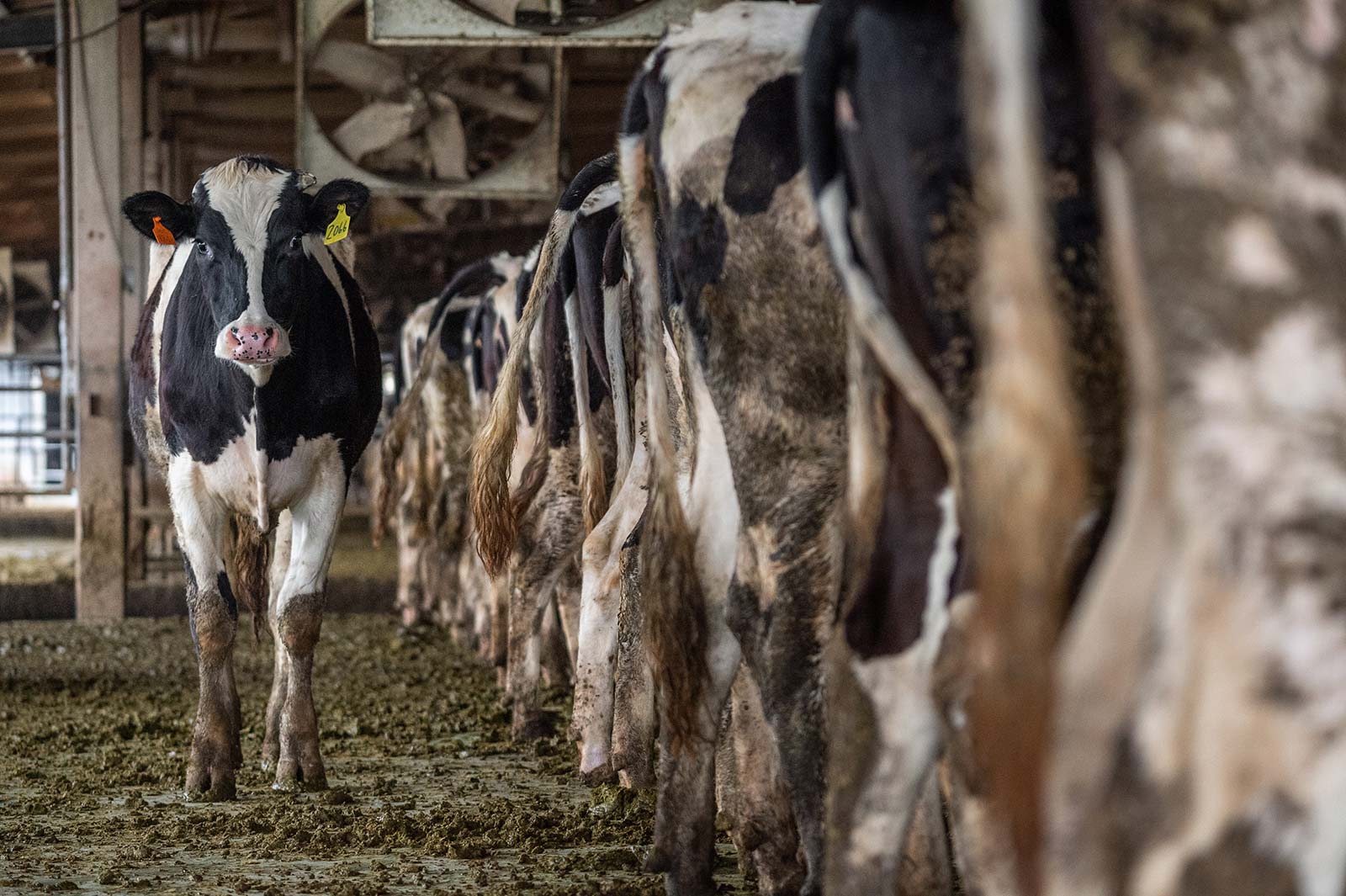 Global meat production has increased tremendously over the past five decades. Worldwide, more than 340 million tonnes of meat are produced each year, most of it in intensive factory farms. These farms are part of a destructive global system of mass-produced industrial meat and dairy – an ‘industrial meat production’ which is harmful for our planet.

Unfortunately, many meat consumers are disconnected from the animal products production process, an industry which causes damage to our environment, and is a significant contributor to habitat loss, soil loss, water usage, and nutrient pollution globally. It is a system driven by large supermarkets and fast food chains – household names who buy from companies and distributors owned or supplied by giants like JBS – the largest meat processing business in the world.

Through its meat production, JBS produces around half the carbon emissions of fossil fuel giants such as Shell or BP, and is a large contributor to deforestation in the Amazon. JBS released 421.6 million metric tonnes of carbon emissions in 2021, a larger output than all of Italy. In 2017, Brazilian authorities announced that they were investigating JBS for illegal financing advantages from state-owned bank BNDES, allegedly leading to a loss of $385 million in public funds. As of May 2022, the Comissão de Valores Mobiliários (CVM) was demanding $3.4 billion from J&F Investimentos as part of a promised plea deal. Yes, this is the slaughter industry . . .

This industrial meat system requires a vast amount of land to sustain itself, and forests are deliberately slashed and burned every year to graze cattle and grow enough crops to feed billions of farmed animals. 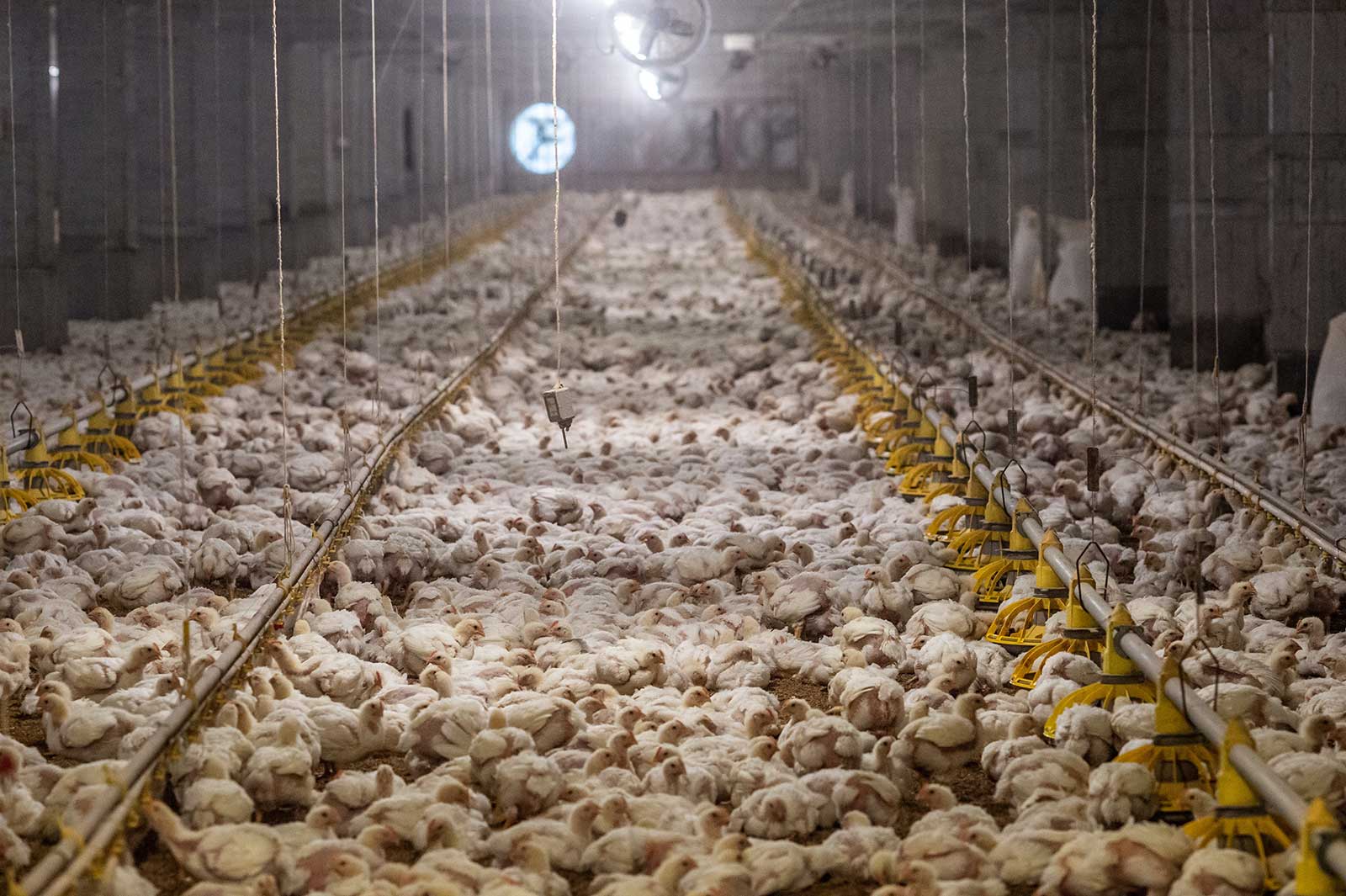 Industrial meat is the single biggest cause of deforestation globally. In Brazil, farmers set forest fires to clear space for cattle ranching and to grow industrial animal feed, like soya. More than 75 million hectares are used for growing soy for feed. Indigenous people are frequently displaced when their forests are cleared, and those that remain are often in danger of pesticide exposure.

The climate impact of meat is huge – meat accounts for nearly 60% of all greenhouse gases from food production, one recent study found. When forests are destroyed to graze cattle, billions of tonnes of carbon dioxide are released into the atmosphere, accelerating global warming. The fallen trees are often left to rot on the forest floor or are burned, creating further emissions.

Healthy trees are essential for absorbing carbon from the atmosphere. If we cut them down, they can no longer help us in the fight against climate change. Trees also produce their own rainfall, which keeps the whole forest alive and healthy. If deforestation continues at the current rate, the Amazon could reach a ‘tipping point’, where it can no longer sustain itself as a rainforest. This would have a devastating impact on the people and animals who live in, or depend on, the forest directly. It could also lead to less rainfall, affecting drinking water and irrigation across large parts of South America; and changes to climate patterns in other parts of the world.

Indigenous People and traditional communities – like the geraizeira and Huni Kuin communities in Brazil –  are at the frontline in the fight to protect forests. One investigation showed that security forces working for soya producer Agronegócio Estrondo harassed, detained, abducted and shot members of the traditional geraizeira communities.

President Bolsonaro and his Brazilian government tacitly encourage illegal loggers, miners and farmers to occupy Indigenous lands, by rolling back historic regulations and legalising land-grabbing. Too often invasions become violent and Indigenous Peoples have been killed by loggers in these conflicts. Mass meat producer, JBS, has been repeatedly linked to suppliers who operate illegally on protected Indigenous lands.

Cattle ranches and soy producers in Brazil have a history of profiting from modern day slavery. This includes suppliers to JBS, whose abattoirs have been linked to terrible working conditions, mass outbreaks of Covid-19 and salmonella-ridden chicken exports. Children from the huni kuin tribe inspect the destruction of forests neighbouring their home in the state of Acre, Brazil.
Photo © Denisa Šterbová.

The industrial meat industry is contributing to the extinction of thousands of species by clearing forests, destroying habitats and using toxic pesticides to grow animal food.

We all depend on a healthy environment for our survival. The huge abundance and variety of the natural world, biodiversity, is essential for food, clean water and medicines. Rapid loss of biodiversity, in large part driven by industrial farming, is possibly as big a threat to our existence as climate change. 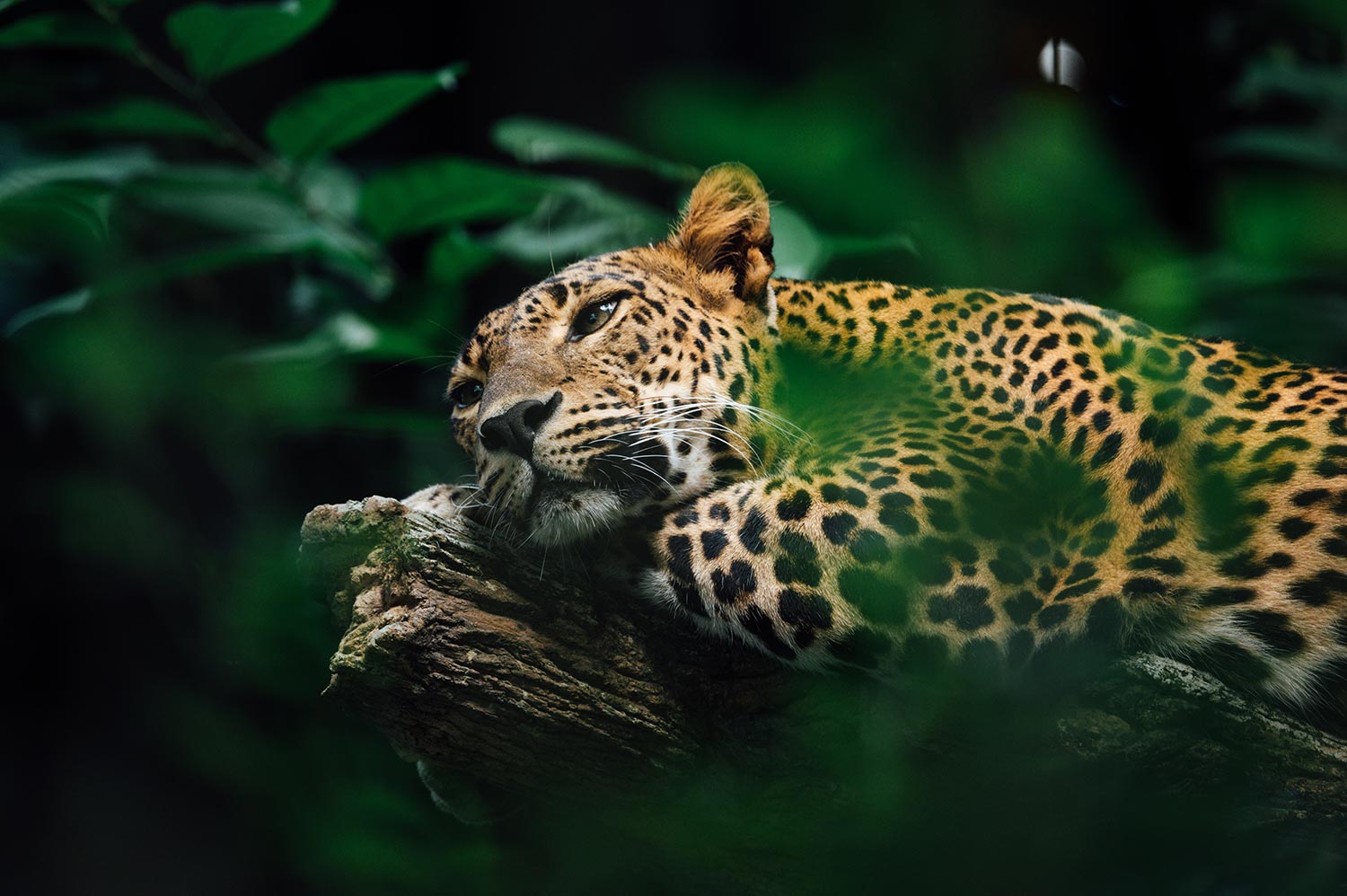 Jaguars are in danger, having lost nearly 38% of their total habitat in Brazil. Photo © Chuttersnap

Destroying forests and other wild areas for animal agriculture is a major cause of new infectious diseases. Three quarters of new diseases affecting humans have come from animals. Cutting down and burning forests brings wildlife into closer contact with people, setting up scenarios for viruses to pass from animals to humans.

Factory farms also increase the spread of disease, both between animals and from animals to humans. The risk is high for industrial meat farms because huge numbers of animals are pushed into small spaces, and these animals have weaker immune systems. This means that viruses can develop more rapidly and have the potential to pass to humans. 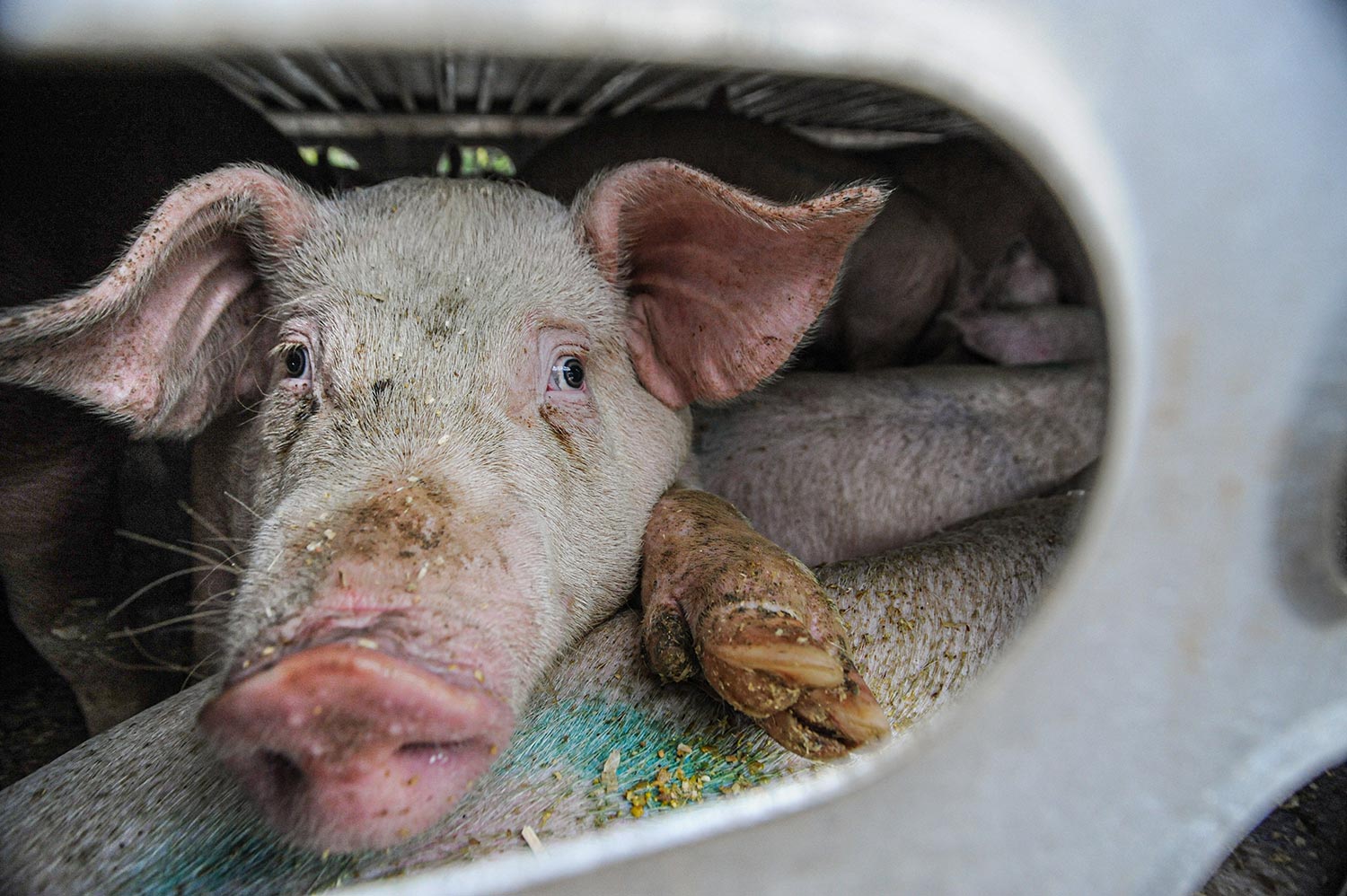 An inefficient way to eat

It has been argued by some that industrial meat is an efficient way to produce food, but this ignores its true costs. Over a quarter of the world’s entire land area is used to graze or grow food for farm animals – areas that often could have been used to grow food for people instead. Just 1kg of chicken meat takes 3.2kg of crops to produce.

If everyone ate a plant-based diet,  75% less farmland would be needed – an area equivalent to the US, China, Europe and Australia combined. It takes less land to grow food directly for humans, than to feed animals. Plant protein can replace animal protein to meet human dietary needs. Instead of monocultures used to grow animal feed, farmers could repurpose land to grow more diverse crops, such as vegetables and pulses. Pulses have nitrogen-fixing properties, are a healthy source of protein with a long shelf life, and can significantly improve soil fertility and reduce food loss in agriculture.

Contrary to many assumptions, meat consumption in the U.S. seems to be growing. A scary thought indeed. We all need to play our part in reducing, and not increasing, our meat consumption.

Smart ways to eat healthily on a budget